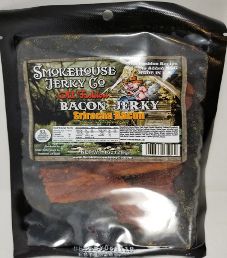 The next review on Smokehouse Jerky Co. will focus on a 2 ounce/56 gram bag of their Sriracha Style bacon jerky flavor. We have previously reviewed this flavor, where the flavor name has since changed, and this review will by written by guest jerky reviewer Paul Rekker. This flavor is described as bacon being delicious, Sriracha being delicious, jerky being delicious and putting them all together with this Sriracha Style bacon jerky flavor. The jerky was kindly submitted for review by one of the owners, Franco Fonseca.

This Smokehouse Jerky Co. brand is manufactured and distributed by Tender Heifer Snack Co., and based out of Beaumont, California. The Smokehouse Jerky Co. brand name was officially launched in 2008. On January 2/2017, Franco and his wife Patti Fonseca acquired Smokehouse Jerky Co. from Trent Levinson and his wife Barbie. Franco has since added some new flavors, got active on social media, and they have a new web site. All of their jerky is made in small batches. Tender Heifer Snack Co. are always looking for new distributors across the United States, and offer private label services 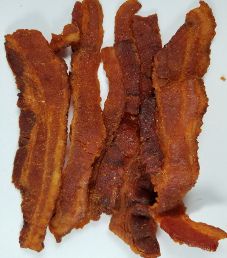 This is a standard ingredient list for bacon. While not good, it contains sodium erythorbate, and sodium nitrate as preservatives to lose a rating.

The marinade consists of water, a decent sriracha sauce, and a good teriyaki sauce.

When I open the bag, I smell bacon and some sort of juice, not sure which one. The strips are long and thin, just like regular strips of bacon. If I didn’t know better, I’d think it was regular bacon. The jerky glistens in the light, and it is a bit oily, maybe a bit more than a bit oily. There is residue left on your fingers.

When I bite into the bacon, er, I mean jerky, I am tasting salt, a bit too much sweet, pepper, slight garlic, I believe vinegar, and the unmistakable healthy dose of sriracha.

Sriracha hot sauce is believed to have been invented in Sri Racha, Thailand. Leave it to the Asians to introduce us to yet another wonder of the world. Who in their right minds would not love the taste of sriracha?

I know I do, and so does Smokehouse Jerky Co. They have drenched their pigs in vats of delectable sriracha sauce, and served them in a very handy, easy to consume jerky form. Pigs are known to be the smartest animals in the world, so I’m sure they thought they had won the motherlode when they were invited to jump into the vats, only to discover too late that they were going to end up tasty snacks in the end, and tasty snacks they very much are, so much so that I am remiss if I don’t award this spectacular flavor of bacon jerky a resounding 10/10. Oink Oink!!

This is a standard resealable plastic bag, with a label affixed on the front, and nothing on the back. The label has a fairly detailed picture that looks like a wooden shack with a “Jerky Co.” sign, and trees in a dark background. There is also a picture of a pig on a smoker.

Some facts printed on this bags are “Old Fashion Recipe”, “No Added MSG”, “No Added Preservatives”, “Made in U.S.A.”, “Old Fashion”, and “Natural Smoke Flavoring Added”.

The only bag category missing is a blurb printed about Smokehouse Jerky Co., Tender Heifer Snack Co., or this Sriracha Cha Cha flavor. 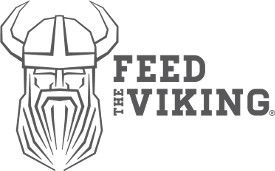