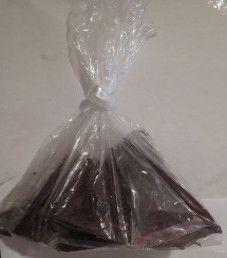 This marks my first review for jerky purchased in 2014, on March 8 to be exact. I mention the exact date because we picked up a puppy for our family, the whippet dog breed. We were asked to pick up this puppy around London, Ontario. So if I am going to drive 2 hours somewhere, I may as well search the area beforehand, where I discovered that Bob’s Ultimate Meats sells beef jerky. They are located in downtown London, Ontario, inside an indoor flea market called the END_OF_DOCUMENT_TOKEN_TO_BE_REPLACED 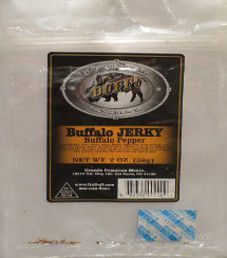 In 2012, I purchased this It’s Buff buffalo jerky online from the elkusa web site. This 2 ounce/56 gram bag of jerky is their black pepper flavor.

This jerky is distributed by Grande Premium Meats, located at the eastern edge of the San Juan mountain range of southwestern Colorado, in a city named Del Norte. They produce ranch-based elk, deer venison, buffalo meat, goat meat, Alaska seafood, antler, and pet food among other things since 1998. Both END_OF_DOCUMENT_TOKEN_TO_BE_REPLACED 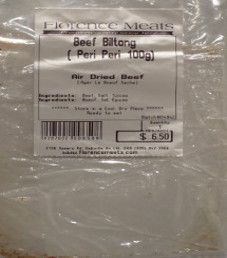 Biltong has South African origins. I purchased this Peri Peri flavored bag at Florence Meats in Oakville, Ontario, Canada. Peri Peri is a unique flavor to biltong, which is spicy, but not overly hot in flavor. The beef is air dried in a climate controlled, sterile cooler for 9-10 days, rather than using a dehydrator or smoker.

Florence Meats is a small meat store that opened up in 1977. They advertise as giving customers excellent service, where END_OF_DOCUMENT_TOKEN_TO_BE_REPLACED