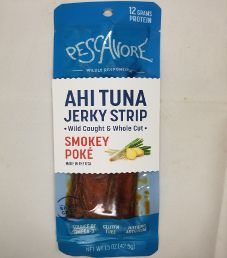 The idea of Pescavore was born of a working, surfing, and diving travel journey to the Marshall Islands in 2013. They were introduced to a delightful food tradition of artisanally produced local fish snacks. Pescavore then started out with a mission to improve education, and make domestic resources more competitive in an international marketplace. They take pride END_OF_DOCUMENT_TOKEN_TO_BE_REPLACED 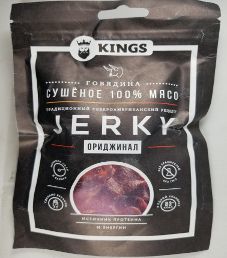 Joel Babb, the owner of Kings Meat, childhood was spent on family farms in Southeast South Dakota. Back in those days the farm was self-sufficient and organic. About 20 years ago, Joel moved to Russia. In 2016, Kings Meat Company launched their Kings Meat jerky brand. Kings Meat jerky strips are suspended from hooks, and carefully dried at a precise temperature. This END_OF_DOCUMENT_TOKEN_TO_BE_REPLACED 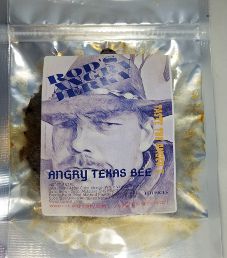 Rod’s Angry Jerky started a few years ago. The taste of store bought jerky just wasn’t cutting it. So with some encouragement from his family, Rod started experimenting with different flavors and techniques as a hobby. Every batch of hand sliced jerky that Rod made just got him closer and closer to the Angry recipe you taste today. In sharing with friends, END_OF_DOCUMENT_TOKEN_TO_BE_REPLACED 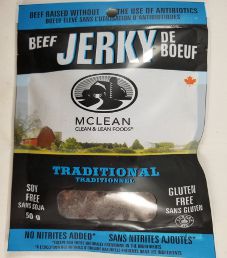 Over 30 years ago, Garth McLean moved from New Brunswick and got his first job working in a Federal meat plant as a truck driver. Eventually working his way to sales, Garth was dismayed with all of the chemicals and preservatives used, Garth then developed Canada’s first nitrate-free deli line called Natural Farms. In 2003, Garth’s friends Michelle Neilson & Deanna Bell joined Garth END_OF_DOCUMENT_TOKEN_TO_BE_REPLACED 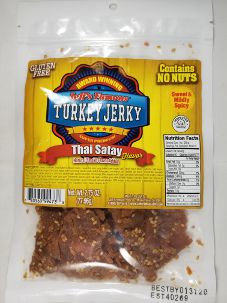 The next review on Jeff’s Famous Jerky will focus on a 2.75 ounce/78 gram bag of their Thai Satay flavored turkey jerky. As one of the newest flavors added by Jeff’s Famous Jerky, this seasonal flavor is described as if you like peanut sauce, you will LOVE this because it amazingly uses no peanuts. As an added bonus this flavor is Gluten Free. So get some before it’s gone, as this Thai Satay flavor has been receiving great feedback to date. This bag was kindly submitted for review END_OF_DOCUMENT_TOKEN_TO_BE_REPLACED